Inside Me an Island is a collection of the sediment of displacement, re-placement, and imagined arrival. With one eye focused (inwardly) on an island homeland, the other roving the natural world for what resembles home, Taitano investigates the push and pull of queer migratory belonging. For the indigenous islander living in diaspora, constructing identity in neocolonial America requires conjuring wholeness from fragments. Transoceanic and transcontinental, subterranean and aerial, these poems sift the waters, from shore to reservoir.

Praise for Inside Me an Island:

“From a diasporic Chamoru perspective, there’s an irreconcilable difference between island and mainland, and between the expanses of California and the accidents of the psychic archipelago, but Taitano’s poetics works by queering that distance, by finding the homology in difference, by embracing the synaesthetic intimacies of landscape…As with other Chamoru and Pacific poetics, Taitano’s work evinces a strong eco-poetic dimension, especially with regard to the intersections between environmental and colonial violence…”- Urayoàn Noel

“With this work, Lehua M. Taitano’s voice strikes the prayer bowl.  Within is an invocation to gather in the spaces beyond false boundary lines  ‘because the news tells us who we are not’  and ‘because our voices are choked in the fumes of B-1 bombers.’   This profound collection is a fierce love letter without beginning or end, a spiraling medicine that moves as water does. A necessary read.”- Arlene Biala

“Anyone who has read Lehua M. Taitano’s debut, A Bell Made of Stones, is devastated by its introductory poem, an immediate evisceration of the mantra as confession: ‘inside me an island / shaped hole.’ This is what diaspora feels like. This is what diaspora sounds like…And with this second book Taitano provides catharsis “to preside over teeth, bones / a wherewithal”, an assuaging  of recurring trauma, with a title extracted from and inlaid within, ritualized over changing landscapes. Perhaps that is how dread and loss are sublime here—to bury Home deep within the unconscious, an island submerged by lyrical tide…because the wrecks and ghosts of the continent are whispering and demand their own poems.” -Sean Labrador y Manzano

“For Lehua M. Taitano, skin is the sharp blur of shoreline, ‘lapping aches’ of erasure, and becoming. She excavates tunnels through hills, and with ‘griefscrawl’ names wounds and rivers, punctures and worms. Set adrift, ‘half this, half that,’ Taitano writes for us an estuary unmoored. In silt and surf, in swoons and swells… she speaks a glossary of the places she contains, ‘a swimming skeleton of everything I could ever say at all.’”- Jai Arun Ravine

Reviews of Inside Me an Island:

Inside Me an Island Shaped (w/hole)? Re-imagining Oceanic Identity in Diaspora

“Translating the ever-flowing movement of the sea, Taitano expresses herself through the versatility of her poetry. In 17 poems Ma’te (Low Tide) explores memories of the sea and her siblings (Shore Song, Create a sibling…), visitations of ancestral spirits (A Night Crowded With Night), erasure and reconnection (Islanders waiting for Snow), patriotism and militarism (Spectator), encounters with racism (Banana Queen) and the feeling of displacement (Trespass). Likewise, Hafnot (High Tide) explores nature and landscape of the mainland United States (Enchanted Rock, Texas) as well as the indigenous stories that are connected to the land (One Kind of Hunger). Taitano’s poems also explore emotional memories of grief (An Oiled Groove) and love (Estuary). With its queer female diasporic Chamoru voice, Lehua Taitano’s latest poetry collection enriches the multiplicity of unique styles and voices of Chamorro poetry.”

“…excerpts from queer Chamoru poet and artist, Lehua M. Taitano mark horizon, distance, islands, oceans, and connections—they weave complexity of belonging to self, place/space, and people.1Felt experience conveys movement under constraint (“away from our islands,” “kept at each other’s distance”) and barriers (“oceans as walls”); while oceanic bodies (“salt in our blood,” “inside us is a liquid web”) comprise our relations (“no matter where we are,” “connecting our beating hearts”) that freely traverse a close space (“your tugs,” “your tangles”). This poem resonates…as I consider Robert Smithson’s Floating Island visual art project in relation to archipelagic and oceanic thinking… specifically as I apply theories of etak (moving islands,the triangulation developed by traditional Carolinian seafarers) to examine Smithson’s work. I also hold these poetic and visual artifacts together to reflect on how they rhetorically engage connection and motion and to map some relationalities between Manna-hata (the Lenape word for “island of many hills”) and Oceania.”

“As I wrestle with my own outside positionality in relation to Pacific literature, I find that Lehua M. Taitano’s latest collection, Inside Me An Island, is a salient re-centring of indigeneity and the Pacific diaspora that resists such empire-driven erasure. The title implies that the island is carried within bodies of the Pacific diaspora; that indigenous spaces and networks migrate as Pacific peoples migrate; that the ocean is a great connector of, and conductor for, situated knowledge. Inside Me An Island foregrounds the local-global network that frames indigenous identities. It attends to the displacements that the diaspora embody. It makes me wonder how we can enact sovereignty, citizenship, and justice in the twenty-first century.”

amberflora: Lehua M. Taitano’s Inside Me an Island, reviewed by Katy Lewis Hood

“The collection is at its most striking and energetic in explicit moments of conversation and collaborative storytelling. ‘Come Sit Around This Stone’ powers through fragments of tales of police brutality, Harriet Tubman, and Prince songs told with a range of other poets at the Kuwentuhan (storytelling/talkstory in Tagalog) event organised by Filipina-American poet Barbara Jane Reyes. ‘One Kind of Hunger’ retells a story Taitano was told her by her friend from the Seneca nation in Turtle Island. Attempting to summarise the story here would not do justice to its nuances and particular ways of telling (you can see it online in POETRY magazine here), but, crucially, the story creates the conditions for another story; a boy gives up the birds he had caught for his grandmother to a stone in exchange for another tale. Taitano writes: ‘The sun has given the stone a mouth. With it, she sings of what has been lost. | She sings and sings and sings.’ The song, the story, and the poem fold back on themselves, through the entangled relations of reciprocal need.”

Vida Reviews! Inside Me an Island, by Lehua M. Taitano, reviewed by Laura Da’

“A significant strength of this collection is Taitano’s willingness to experiment with form. These poems range from the epistolary to long, dense prose poems to wide and expansive poems that dash from margin to margin with lean athleticism. These movements across the page in poems like “Sonoma” and “Shore Song” create littoral rhythms that hint at the timelessness of current, but also tease a sense of diaspora’s brutal fractioning and cleaving. Taitano’s spare words in these poems become relics of isolation from the whole.”

A Bell Made of Stones | TinFish Press

Lehua Taitano’s unforgettable poetry joins a new wave of Chamorro and Pacific literature. In A Bell Made of Stones, she bravely navigates the currents of mixed-race indigenous identity, transoceanic migration, and queer sexuality through a series of experimental (and lyrical) typographic poems. With the typewriter as her canoe, Taitano chants homeward “for the flightless, to stretch roots, for the husk of things set adrift.”–Craig Santos Perez

Praise for A Bell Made of Stones:

The journey through A Bell Made of Stones shifts us from empathetic observers to experiential participants. We are forced to engage with the unsettling disconnection and stress of locating a coherent voice and a culturally legible identity/identities in the fragments of loss and daily misrecognitions created by distance, diaspora and resistance to performing so-called hetero-normativity. Evoked instead of told, the poetry evolves into an installation that is beyond words, bearing witness to the stigma of enunciating through disconnected discourses. There is a surprisingly elegant, dignified aesthetic to the collapsed, repressed text that bares the raw marks of scarcely audible attempts at making meaning. While we are invited to find the lament left on the page, left with the palpable sense of what is missing and/or mistranslated. What is left to savor are the sparse, poignant leftovers—stringing together separate stories of mother, sisters, lover and other. But more than anything, we are left with the sense that the fragments are more (and less) than (and may never add up to) the sum of their parts.

A Bell Made of Stones is a synaesthestic kaleidoscope—where we listen to “sheen” and “husk” and “rope,” where the canoe can sing, and where what seems solid might “settle as through a sieve.” Taitano’s poems—her “stampings”—pile-up lyrical language into gorgeous collisions of type. Yet, as “visual evidence of the echo,” the poems also gesture to what is not there, such as “the surfacing and submergence of islands of sound” made by a typewriter. As poet-guide, Taitano shows her reader how the map of her every day contains assumptions and aspersions cast by others, reminding us that she is “with and without explanation.” These are poems where a hyphen can be both a “perforation” and a “stitch.” Be patient. Wait out assumptions. Ready oneself for revelation.

Lehua Taitano’s A Bell Made of Stones formulates in its “tethered tautly” poems the truth of her birth and the necessity of her aesthetic address. Rich with protest, these poems map the “story of [your] blood.” These are “heroic feats” that endure with clairvoyant strength and keep asking if there is “anything truer than truth.” These poems keep replying, going beyond “the bareness of lament.” This is a fierce and brilliant collection of poems—chock-full of issued utterances, elliptical enjambments, cross-outs, and elision—all of which persevere in constructing an apt orchestration between the tongue’s experiment and typewriter’s keys. 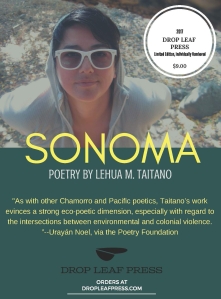 A numbered, hand-sewn chapbook of poetry.

From Urayoán Noel, via the Poetry Foundation:

“This new chapbook continues Taitano’s diasporic mapping of landscapes and bodyscapes. Here, the bold typewriter text-bombs and strikethroughs of 2013’s A Bell Made of Stones give way to a languid love letter to Sonoma, California, its lake, its lack, and its simultaneous familiarity and foreignness. The speaker here is “adrift” in diaspora, but also attuned to the pleasures of displacement. From a diasporic Chamorro perspective, there’s of course an irreconcilable difference between island and mainland, and between the expanses of California and the accidents of the psychic archipelago, but Taitano’s poetics works by queering that distance, by finding the homology in difference, by embracing the synaesthetic intimacies of landscape, just as she does in her short story chapbook appalachiapacific (2010). As with other Chamorro and Pacific poetics, Taitano’s work evinces a strong eco-poetic dimension, especially with regard to the intersections between environmental and colonial violence, a crucial aspect of 1898 poetics that I don’t have room to carefully consider here. A great poet once wrote, “Pardon me 4 breathing, can we borrow some of your air?” Taitano’s Sonoma unpacks the question with the exquisite flow of its breath.”

“Sonoma as a book of dignity and definition. As the result of craft. As a result of the poet as present, to siphon, funnel, perceive, relay. Taitano as the investigator, but there needs to be another word: a form of investigation that exhibits respect, is careful, is intensely aware and is resolved to an acceptance of the emerging beauty…

The words in Sonoma feel energetic. They feel etched: temporal but placed with a fixed and impressive effort. Or they feel engraved: to be as permanent as witness, actualized or potential. A poetry that sits like a body of water on a body of land. A poetry that grips the land through immense weight, and there are countless angles, and there is constant possibility.”

appalachiapacific is a chapbook of short fiction and winner of the Merriam-Frontier Award.